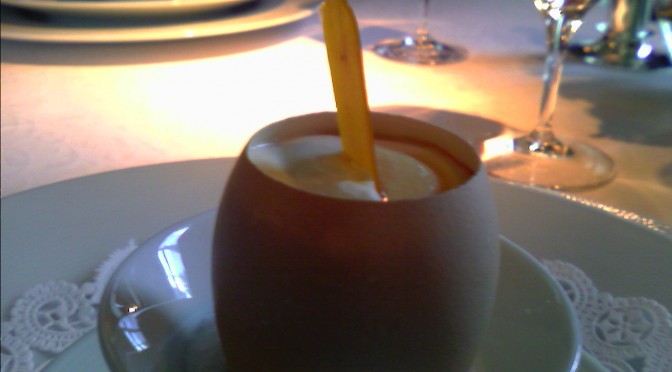 Guenter Seeger began his career in Atlanta in 1985 at the Dining Room at the Ritz Carlton Buckhead. Since then, Atlanta has had an apparent love-hate relationship with this uber-Chef. Noted as much for the food as for the awkward service at his eponymous restaurant he opened in Buckhead in 1997, it was widely reported that he was going to shut his 5-star Mobil-rated restaurant down in late August due to $265,000 in back taxes and the pursuit of ‘other interests’. Well, investors apparently swooped in at the last moment to keep the illustrious restaurant running. So fellow foodie and friend Joel and I decided to go before Seeger ‘closed’ again. Our wives had their own date down the road at Nava – they were not so keen on the high-falutin food nor ‘tude for which Seeger’s is so well known. Well, they missed out – big time. Read on for more about the menu and the experience – including Joel and my ‘anniversary’ desert!

As advertised (note that Joel had been here and photographed Seeger several times, so he knew what we were getting into), the initial odditiies in service began when the valet didn’t offer a ticket – just asking for our name. Hmm, I thought, I always enjoying reading the fine print on the valet reciepts. Oh well. Then we had not one, but two hostesses meet us at the door – outside – and usher us past a curtain and suggest we sit in the small area near the bar. No offer of drinks – nothing – just a fairly sternly worded and European-accented ‘please sit.’ And we did.

The bartender came around in a few minutes and asked us if we would care for champagne, wine or a cocktail, Joel ordered a Negroni (campari, gin & vermouth) – and the bartender didn’t know what it was. Hmmm, I thought. I was more straightfoward, asking for a G&T – pedestrian however, as all they had for gin was Bombay Sapphire. No Hendricks, my new fave. Oh well. Moving right along, they offered us a tasty popcorn with smoky salt and a lovely goat cheese amuse bouche while we waited. Along with the drinks, they also brought the menus for us to peruse, which seems like a sensible use of the time spent ‘waiting’ for a table I have no doubt was empty and ready to take us from the moment we pulled up outside at 6pm – unless they have a hertefore unadvertised 2pm seating.

Add to that legnthy degustation menu two amuse bouche – one a lovely tomato & eggplant gelee, plus what was possibly the most memorable item of the entire meal – a farm fresh egg (sans yolk) poached in vegetable consomee and served in the shell with maple creme and the briniest pressed bottarga roe (photo here and pictured at beginning of this post). Absolutely a challenging taste, but amazing nonetheless.

The terrine (photo here) was not my usual cup of tea, but the aspic teamed with the aggressively mustard-y compote and contrasting texture of the shrimp just worked. The parsley essence took the form of a cube of jelly, infused with the pure flavor of the herb. Just lovely, along with the creamy smooth vichyssoise and crunchy focaccia with tart plum preserves. Joel opted for the foie gras first course, which was quite interesting – but not my thing. The paired muscadet was yummy though.

I skipped the Pompano with black olive sauce planned for the fish course and instead tried the sake-poached loup de mer. Fish-forward in flavor you might say, the texture of nose of the fish was well paired with the buttery avocado puree. After the longest pause between courses of the night, the day boat lobster was everything you’d want a few succulent bites of the oceans finest crustacean to taste like. Smooth, not at all rubbery, with a subtle briny flavor, and made a lovely pairing with a Patrice Rion 2004 Bourgogne Chardonnay. The asparagus were perfect, of course, and big around as a highlighter.

The squab was our first move from whites to red wines, and the Costa de Oro Pinot Noir from California was awesome. The squab was quite gamey, but the fig confit foiled this well. And I loved the wild shrooms. I lost count of which and how many cheeses we each selected in the degustation – by the time they pulled the table of cheeses away I had already forgotten all the names. The clafouti was my ideal dessert – give me anything with fruit that’s fresh out of the oven, and I’m a happy camper.
Lest I forget to mention the petit fours and truffles served at the end of the meal with the words ‘Happy Anniversary’ penned in chocolate. I knew it might be suspect going out for a $500 meal with another guy alone, but come on, people – talk about jumping to conclusions!

Yes, there are choices in Atlanta where the food is of a similar stature – Bacchanalia/Quinones and The Dining Room at the Ritz Carlton come to mind. And yes, the service is probably less stiff at those establishements as well. But it’s easy to understand why chefs like Daniel Bouloud took a trip to Atlanta on Seeger’s ‘last night’ to be sure they tasted Guenter’s magic one last time. Atlanta is better for this restaurant – awkward service or not, it was an amazing dining experience.

2 thoughts on “Seeger’s Soldiers On…”