Oy. The water cooler is abuzz today with the unusual ending of the eight-year-run of the Sopranos last night. So much so, that for a time last night, the influx of users took down the HBO.com web site immediately after the episode aired. The NYTimes has a good review as well if you’ve already seen it. And the message boards at HBO.com are flooded with both positive and negative commentary. Anyway, if you have Tivo’d the show and haven’t had a chance to watch yet and don’t want to see any spoilers, stop reading now.

People are up in arms. By I rather think it was poetic. Nearly every episode of the Sopranos to date closed with a song playing at the end of the last scene, continuing into the credits, typically tied to the mood of the episode, often with a sly ironic nod to the viewer. This episode took the opposite tact – the music was everywhere, from the classic rock rousting the M-16-toting Tony from his hideout early in the show, to at last, the insider’s joke of Tony twirling the table-top jukebox looking for ‘just the right song’ to accompany his exit-stage-left swan song from one of televisions most memorable shows and the music, and show, ending abruptly in silence on the word ‘don’t stop,’ with a black screen giving way to the silent credits.

It’s obvious that there was no ‘right song’ for Tony to choose, just as there was no ‘right ending.’ Part of the audience would have screamed bloody murder if Tony had gone down in a hail of bullets, others would revolt if he had gone to jail for life. There was no legitimate ending that would satisfy the ouevre that is The Sopranos. So regardless of what happened in that diner when it seemed like everyone’s cable (or in my case, my finicky DVR from Comcast) went out. Did one of the suspicious characters open fire on the entire family? Or did A.J. get over his depression, Meadow go on to ‘fight the state’ as a lawyer, and Tony – what of Tony? Fighting a federal indictment? Dead? It doesn’t really matter. And that’s what David Chase showed us – that there was no answer to this most realistic of family dramas. Happily ever after or massacred together, neither resolution would feel authentic. Ambiguity let’s us all decide, and The Sopranos live on in American television history.

ps – I loved the spooky cat, as Paulie, the last of Tony’s original crew, sunned himself on the sidewalk. The cat seemed to represent all those members of the extended family that had gone on to another place. Gone, but not forgotten. 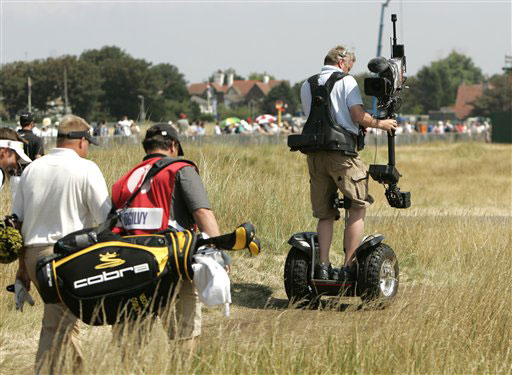 Watching the Open Championship (aka The British Open to us Yanks), I thought I spotted an unusual mode of transportation being used by one of the roving camera positions. A quick search of the wires found the image above – a television cameraman operating a steadicam rig atop a Segway was in fact following the golfers. Having chased the likes of Tiger, Norman, Els and the rest of them in the past, I know how heavy all that gear can be – seems like a perfect application of Dean Kamen’s technology. In the image above by AP Photographer Alastair Grant), you can see the driver has the rig aimed backwards at the group walking down the fairway – probably a lot easier this way than fast-walking backwards into one of those pot bunkers! I’m pretty sure this is a custom version of the XT model – while they do sell a version of the scooter adapted for the player with more money than sense that also carries their golf bag (the GT), I don’t see a camera-ready version on their site.

With the 37th season premiere coming up on August 14th, the Sesame Workshop will introduce their first new female character in 13 years.

The new character, Abby Caddaby, will use the catchphrase “that’s so magic.” The muppet is a pink “fairy-in-training” who uses rhyme and magic to express herself. A Sesame Workshop release described her as “a youngster who knows just enough about magic to get herself in a jam but not always enough to get out of trouble.” via TV Week

Celebrity guests for next season include Jamie Foxx, singer John Legend, “Today” show host Matt Lauer, and comedian Amy Sedaris. No word if her brother will join her to scare the children. Sam was heard muttering at the news:

“They better not cut Elmo’s screen time, or there will be h#*^l to pay!”

Although I never had time to blog about it at the time, I wanted to mention that I had the most enjoyable time during the annual Masters golf tournament watching the action unfold in glorious high-definition. Sunday featured an unexpected continuation of the third round beginning at 8 a.m.,

and Sam and I had a grand old time watching the early-morning light paint the pine trees lining the Augusta National fairways. HDBeat is reporting today that the HD-bug will extend to NBC when they air the U.S. Open from Winged Foot in New York on June 15-18. I hope to see every bit of that one in HD too.